A company without a clear view of its own future stumbles ahead into uncertainty. This is the subject of my first e-book, Getting to Next: The Urgent Need for Nextsensing [link]. Today, I am posting my second e-book — one that introduces the best tool I know for moving out of organisational ambiguity, the “Opportunity Foresensing Canvas”.

In my career, I have not only studied companies in-depth; early in my career I also lived the corporate life full-time. Since then, I have interviewed, counselled and challenged countless organisational managers and MBA students. This is how I know that disruptive ambiguity (living in the uncertainty of too much data leading to no clear strategic path) is a problem that most people are struggling with today. Even those who might seem to be invincible are, in fact, vulnerable.

Take Apple. From its 1980s roots, it has evolved into a “think different” mega-corporation that brought the world unique computers, iPods, iPhones and iPads. Yet, as I write this, Apple just reported its quarterly earnings and its stock is dropping. 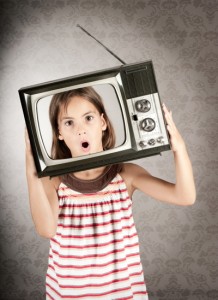 This is not because it has a present-tense problem. It sales and profits last quarter were robust. Apple has a future-tense problem. Here’s how Bloomberg Businessweek describes it: “So there were no blockbusters. Not this quarter, anyway. With only a month’s worth of sales of new iPhones — they hit retailers on Sept. 20 — and no new iPad sales off last week’s announcements, Apple didn’t offer a gotta-have-it product in its lineup for the better part of the quarter.” [link]

In today’s marketplace, you’re not in good shape unless you have a solid answer to the question, “What’s next?”

Thus, my new e-book: TV or Not TV? Apple and the Opportunity Canvas [link]. As with my first e-book, it’s in PDF form and is designed to be read in 15 minutes or less. But brevity, in this case, is a powerful asset; it allows more people to quickly get to the centre of new thinking where opportunities abound.

And the centre of this new e-book is actually not Apple, it’s the canvas. Given my work with thousands of people in the business world, I have a good feel for what might help them the most. The Opportunity Foresensing Canvas (which is included at the end of both of my e-books) is a simple, logical, practical tool. It is something I built based on solid interactions with hundreds of top-level managers and thousands of students. It is a tool that I and others use today.

Yet I thought that introducing the tool by talking about Apple would be a helpful way to show that the Opportunity Foresensing Canvas is something that can be used for even the most daunting problems.

And the future of television is, as I see it, one of the most intriguing questions facing the marketplace. Most of the world has been living, by and large, with the same television set that people used more than 50 years ago. Oh sure, we have the ability to record shows and use our remote controls for all kinds of actions. And, yes, we can stream videos from the likes of Netflix.

But many have been asking “what’s next?” when it comes to television. More than that, there has been a groundswell of expectations that Apple would be the company to take TV to the next level. Maybe yes. Maybe no.

For me, however, the question of a new definition of the term “Apple TV” was a perfect fit for showing you how the Opportunity Foresensing Canvas can be used to move from ambiguity to clarity, from present-tense performance to future-tense insights. Mulling about the shape, size and feel of a new Apple TV experience was just one way to bring the canvas to life.

I hope you enjoy this new e-book. I’m already asking some of my closest associates to actually project what they think (by using the canvas) a new TV experience might look like — designed by Apple or anyone else. I plan to publish their canvases on this blog in the near future.

But no one need wait on Apple to start using the canvas (it has a Creative Commons license so you are free to use it). As you download my PDF e-book, I’m asking all my readers to think about how they would apply it to problems in their industry/sector. My new e-book will have accomplished its mission if readers start applying the tool to help individuals, groups and entire companies “think differently” about opportunities now hidden in uncertainty about the future.