What The World Needs Now

Hundreds attended. News was made. And I left the World Knowledge Forum in Seoul, Korea, last week, with some strong impressions about what the organisational world is searching for today.

First, the backdrop: this was the 15th such forum, and the theme was “Invigorating the Global Economy: The Answer to a New Social Order and Global Solution”. You can review many of the highlights simply by scrolling the @wkforum Twitter feed. That said, the list of speakers was stellar. All are listed on the WKF website [link], but included were presidents of countries, CEOs of companies, chiefs of a number of non-governmental entities, and many forward-thinking academics. I don’t have a firm count, but attendees must have come from at least a dozen or more nationalities. The number of speakers exceeded 100. It was a fantastic mix of backgrounds and perspectives.

In my last post, I summarised my own message to the forum [link]. My talk seemed to generate a great deal of follow-on questions and discussion. I am most grateful to the sponsors for having me on their programme. Now, I would like to share some of my impressions from being part of the forum over several days. Please take these as top-of-mind observations rather than any kind of formal report or digest of the event. I’ll let the sponsors of the forum capture and publish that at a later date. For now, here are my own key observations. 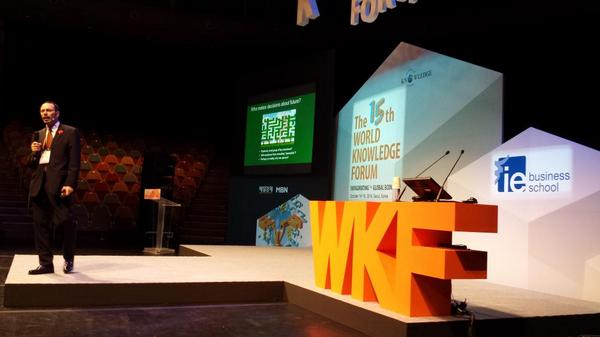 I left Asia with many new friends — encouraged by their future prospects. But there is (as you probably guessed) an important “if” that needs to be stated. The forum fortified for me the feeling that capitalism has “won” the race to become the best economic model for the world. Then, too, democratic principles are proliferating even in countries long shuttered from such political beliefs.

Yet, so many companies (everywhere) operate with a top-down point of view, with relatively few people deciding the direction, and thus the fate, of companies. So, I remain encouraged if capitalism can begin to embrace a model that is more democratic. If capitalism can develop into a new-and-improved form — one in which its power to use collective insight as a means for finding a “next” that meets the needs of individuals, organizations and society — then all parts of the world can share my encouragement.

Workers in most progressive companies have benefitted by being asked by management to openly discuss, “How can I do job X or task Y better?” Imagine a firm led from the centre, one in which workers are asked to join a conversation that begins with this question: “How can I create a better life for myself, a better future for my organisation, and an even a better world for my children?”