MIT has just launched a bold, brave and public initiative to reimagine what the university could be in seven years. This is the kind of nextsensing initiative that so many public and private enterprises desperately need to do but either (a) don’t know it, or (b) are too hesitant to begin. And one imagines that MIT President L. Rafael Reif thought a good deal before launching his “Institute-Wide Task Force on the Future of MIT Education”. But he did launch it; and, now, under the guidance of Professor Sanjay Sarma (MIT’s Director of Digital Learning) and MIT Executive VP/Treasurer Israel Ruiz, a panel will study how MIT can thrive, if not lead, in a world of increasingly digital classrooms. The panel is to report in six months, with a final report due in a year.

Why is this exciting? I count (at least) five ways.

President Reif admitted that education is in the midst of a revolution. One senses that he and others at MIT noted the rapid growth of online learning trends (such as their own edX and MITx efforts) and became dizzy thinking about the possible impact on a campus that occupies 168 acres and enrolls thousands of students. Will we have as many students coming here in seven years? How many will actually want to reside near the campus year round? If there are fewer students on campus attending regular classes, what will happen to all our faculty? MIT had to have asked questions like these and found that there were few obvious answers. That’s disruptive ambiguity!

The president appointed two top, credible leaders to lead the panel. This signalled the gravity of the opportunity and the importance of the issues at stake. Hi-profile leaders for a project like this means that the president is fully backing their work. Everyone at MIT, thus, must take note. 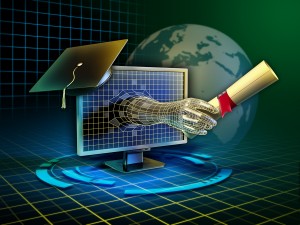 The president launched this nextsensing effort with a totally open communication. You can read his launch letter here. This has set the stage for the entire institution to at least support, and likely to participate in, the process of developing an opportunity foresense of what MIT needs to become by 2020. (Notice I’m not saying could become; I have no doubt that MIT will need to change, and fast, to remain an educational leader. This entire effort is thus both a challenge as well as an opportunity.)

The president made clear that the stakes are high, and not just for MIT. In his charge to the panel, his first two sentences state, “Higher education is striving to respond to the forces of disruptive change. While many US students struggle to cover the cost of higher education, colleges and universities are straining to cover the cost of providing that education.” In other words, what MIT decides to do after its panel makes its final report could easily have vast repercussions in the US (and, really, worldwide).

The president emphasised that the panel’s work is as much about imagination as fact-finding. As he states in his charge letter, “We must seize the opportunity to reimagine what we do and how we do it.” It is always amazing how many groups I encounter that are searching for their future with the idea that the only way to do so is through research. To be sure, nextsensing respects and requires factual data; it involves observation of current trends as well as organisation of those trends into patterns and insights. But the third step in the nextsensing process is the key one: origination of a novel point of view, one that lists any and all ways that an enterprise can move in order to succeed in the future. That last step requires imagination. So, congratulations, MIT: from what I can see, it has its process focussed just right.

Because this is such a major, public example of nextsensing, I plan to write another blog or two about some of the nuances in this initiative that could be helpful in your own efforts. Whether you work in a bank, a factory, a store or an office, what MIT is starting to do will affect you. Make sure you keep their work on your attention screen.