The Value of Downtime Is Going Up

On a cold day last January, I reported on the latest in summer vacations. The news in my post was about companies such as Daimler that were now making it possible for employees to take time off and not have to worry about emails or checking in with the office. During an employee’s time away, someone else would be assigned to cover the vacationer’s duties. The logic behind this was simplicity itself; too much work can literally make people crazy:

The problem of having to always be on-call when it comes to your job – evenings, overnight, holidays, weekends, vacations – is a familiar one to many, who now feel guilty if they miss even one call from the office. [New York Times reporter Tanya] Mohn’s article includes some statistics from a 2012 survey done by the Pew Research Center. Of 2,254 people surveyed, some 44 per cent of those owning cellphones slept with it activated and next to their bed. Think that’s bad, try this additional stat: “67 percent had experienced ‘phantom rings’, checking their phone even when it was not ringing or vibrating.” 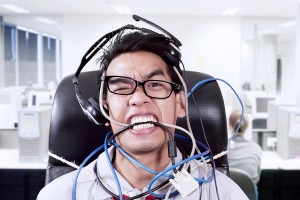 About a year ago, Lauren Hockenson wrote about the “Tell-Tale Signs Your Employee is Overworked” [link], and her post has some fantastic illustrations and infographics on the subject. She talked about the anger and irritability, reduced memory capability, lower quality of work, fatigue, sloppy time management and other hints that someone has worked themselves into a life frenzy. And though her data foundation is US-based, I can assure you that the symptoms and the disease can be found around the world. And the consequences of too much work are, thus, dangerous to ignore. As Hockenson notes:

Of course, the consequences of ignoring these signs can be major — 66% of employees suffer from stress-induced health issues, including but not limited to high blood pressure, headaches, sleeplessness and more frequent periods of sickness. Overworked employees are also more likely to have drastically decreased productivity and play hooky than those who are satisfied with their workload. The overall result is clear: Overworked and stressed workers are never good for a company.

This matter is even making the news. Consider this headline: “Overworked? 24-Year-Old Ogilvy China Staffer Dies After Heart Attack at Desk — Cause of Heart Attack Unknown But Death Raises Issue of Overwork in China” [link]. Anita Chang Beattie wrote of this in Ad Age on 16 May of this year. And she said that this incident is not an uncommon occurrence:

Although it was not clear whether long hours played a role, overtime is routine for white-collar workers in China. Culturally, there are few boundaries between work and personal life. Punishing work hours are common in China’s marketing industry, with its notoriously demanding clients.

It’s not the first time a young person’s death has been linked to their career; in 2011, the Shanghaiist blog speculated that a 25-year-old female auditor working for PricewaterhouseCoopers in Shanghai was worked to death.

Yet the choice is not whether to take time off or face premature death. The incidents in China are noteworthy here because the two individuals cited in the story were under 30 years of age. I’m not an expert on this, but it seems to me the burden of overwork must be heavier as one grows older. I write this now as a suggestion that, if you have not already, you should consider booking some time away for two important reasons.

First, time off is proven to be restorative to one’s overall health. Rather than send you to some statistics-filled website (easy to do!), why not take a quick look at the post by Grace Bonney on “the luxury of time off” [link]? She admits to suffering from too much work, and I like the idea that she does not feel that one in an overworked state needs weeks or months away to get back to 100 per cent. A day or two of being really away can do wonders for the work-oppressed.

Second, when it comes to nextsensing, one can be too attentive to the challenge of thinking strategically. That is, you can often benefit from leaving a problem, doing something completely different, then returning to the important challenge. Derek Thompson’s own comments and those from some of his readers on this subject are most compelling [link]. The headline says it all: Vacation Nation: ‘I Have Solved More Problems on a Walk Than Brainstorming’. Yes! Thompson quotes Samantha Brown in this article:

I use vacation time to completely let go of work. It is a time to re-charge the batteries and focus on the things that I enjoy. I try to leave all the things associated with work at the office. Everyone likes to think that the company won’t function without their presence, but it just isn’t true. They will find a way to manage without you. When I am on vacation, I turn off the cell and shut down the computer. I go completely offline for the duration. When I get back to work, I am completely refreshed and ready to jump back into my work life. I am more productive and efficient because of breaks and vacations. I don’t feel the “burn out” that comes with working long hours under stressful conditions. I can stay calm and positive under pressure and meet new challenges eagerly.

As more and more people work more and more hours, it’s important to realise that pushing harder, working longer and all the other nose-to-the-grindstone clichés are counterproductive. Here’s what Tony Schwartz said in The New York Times not that long ago [link]:

MORE vacations are similarly beneficial. In 2006, the accounting firm Ernst & Young did an internal study of its employees and found that for each additional 10 hours of vacation employees took, their year-end performance ratings from supervisors (on a scale of one to five) improved by 8 percent. Frequent vacationers were also significantly less likely to leave the firm.

The headline of his excellent article will handily serve as a closing here: “Relax! You’ll Be More Productive”.