The Power of Influence

When I spotlighted Joi Ito of MIT’s Media Lab, it was because I felt he was having a positive influence. Hmmm. Influence — an interesting word, no? It’s used in a lot of ways and often affiliated with the word power. For example:

(1) A couple of months ago, TIME honoured its 100 most powerful people. The magazine prefaced its list with these words: “TIME presents its annual list of the 100 most influential people in the world, from artists and leaders to pioneers, titans and icons.”

(2) Last month, Forbes celebrated “The World’s Most Powerful Women 2013”. And, plainly, you couldn’t make this list unless you had great influence: “We’ve selected women that go beyond the traditional taxonomy of the power elite (political and economic might). These change-agents are actually shifting our very idea of clout and authority and, in the process, transforming the world in fresh and exhilarating ways.”

(3) But influence is not just about people. Last night, I spotted a press release highlighting an upcoming presentation by Marketwired CEO Jim Delaney, who shares research that shows that social media are having an influence on how people invest: “For publicly traded companies, social media is more than just a channel to distribute information. It’s shaping investment decisions. In fact, Marketwired recently commissioned research that found 60% of investors and analysts under 40 years old are already regularly consulting social media to inform their decisions.”

(4) There have been at least two recent books published on this topic: Kevin Hogan’s Invisible Influence: The Power to Persuade Anyone, Any Time, Anywhere [link] and Mark Schaefer’s Return On Influence: The Revolutionary Power of Klout, Social Scoring, and Influence Marketing [link]. 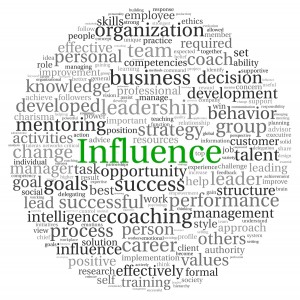 Since I have been tracking how people and companies find their next, I can affirm that getting to next involves influence as much or more than power. The reason for that is that people have to believe in the merits of a change of direction before they themselves will actually change. Those who think they can simply order an organisation of 10, 100, 1,000, or 10,000 to “Change!” will find that the established order can be a commanding adversary to progress. Thus, I would point you now to two excellent, short treatments of the role of influence in any enterprise.

First, read last month’s thoughts of Dennis Sparks on “6 ways you can influence others”. Here’s how Dennis opens his post: “The most common question I’m asked by system administrators, principals, and teacher leaders is some variation of, ‘The people I work with are unwilling to change, and I don’t know what to do to get them to open their minds.’ Put another way, these leaders are interested in being more influential.” He writes with an educator-to-educator point of view, but I have spent enough time in the corporate world to tell you that his advice is most applicable to business managers and leaders.

Second, sift through the points made by John Butman on the HBR Blog Network. His short essay on “How to Influence People with Your Ideas” intrigued me because it lists six questions that every person should ask before trying to influence others. These questions range from the big “what’s my purpose” level but also include nuts-and-bolts questions such as whether you have the supporting material you need to build your case with others.

Let’s face it, anyone who has an interest in nextsensing has at least a minor interest in people who have changed the world. One website has a great set of lists of such people, in fields such as politics, technology, entertainment and business. The site admits to a bias toward the Western world, but it invites you to submit your own list or to challenge its selection. It’s a fun site for fans of nextsensing, and its opening lines set the stage for my closing right now. “There are countless people who changed the world, so I figured I’d break them into categories. My criteria is simple, those who have the biggest positive impact.”