I’ll start with the concept of “explore vs exploit”, which was introduced by James March in “Exploration and Exploitation in Organisational Learning” [Organisation Science, Vol. 2, No. 1 (February 1991), pp. 71–87] to distinguish how organisations learn. One of the contributions made by this article was to affirm the reality that, since an organisations is a collection of people, the way it apporaches problem solving follows the way its leaders and followers think. Toward the end of this article, which is too rich in content to summarise here, March says:

Learning, analysis, imitation, regeneration, and technological change are major components of any effort to improve organisational performance and strengthen competitive advantage. … The essence of exploitation is the refinement and extension of existing competencies, technologies, and paradigms. Its returns are positive, proximate, and predictable. The essence of exploration is experimentation with new alternatives. Its returns are uncertain, distant, and often negative. Thus, the distance in time and space between the locus of learning and the locus for the realisation of returns is generally greater in the case of exploration than in the case of exploitation, as is the uncertainty.

One way to think about this concept could be as follows. When an entrepreneur (or a company) finds it is doing something very well, many people within the firm naturally think that the #1 job is to exploit that product or service. “Selling like hotcakes” is the cliché that comes to mind; many will not want to tamper with evident success. On the other hand, it took a certain amount of exploration to come up with that hot-selling product or service. Those with an exploration mindset will want to find what’s next, no matter how successful the firm is right now. Thus, there’s a battle between mindsets that could easily break out as those who love the way mainspring watches are selling find themselves arguing daily with those inside the firm who keep mentioning the word “quartz”. 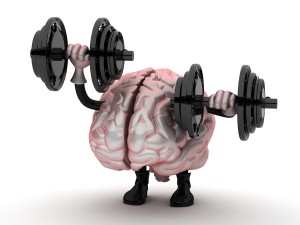 Okay now jump to 2013 and a most-interesting update by Anya Kamenetz in Fast Company. Her article (“MIT Brain Scans Show That Entrepreneurs Really Do Think Different”) reports on an interesting study: “Researchers from the neuroscience department and business school collaborated to scan the brains of 63 subjects, divided between self-described entrepreneurs and managers, when engaged in a game.”

This new scientific evidence bolsters the argument that in today´s world we need more “exploratory” thinking and corresponding actions in order for our organisations to learn how to do new things that create value, the essence of innovation. But, the “aha!” here is that it does not have to be about a battle between thinking either this way or that way. As she reports:

The entrepreneurs in the study, perhaps surprisingly, weren’t any more likely to engage in exploration. But when they did, they were more likely to activate both the right and left sides of their frontal cortex. Managers mainly stuck to the left side, which is associated with logic and structured thinking. The right side, on the other hand, is associated with creativity and emotion.

The idea of the “ambidextrous” mind is nothing new; but the overwhelming mindset, toolset and skillset of today’s management practices are markedly unfriendly to the explorative side of the equation. Those working on this Nextsensing project are trying to change that; we want to equip managers and leaders alike with becoming more ambidextrous. This, we have found, is the best way to generate opportunity foresense, a set of presumptive hunches that frame what merits more exploration.

What would I wish for you and your enterprise can be summed up around four words: I’d like you to have more ambidextrous, professional, entrepreneurial-minded leaders precisely because they incorporate the mindset, skillset and toolset used by successful entrepreneurs to explore new opportunities without abandoning or replacing the complementary skills and tools of exploitation. Both are necessary, but neither is sufficient in and of itself in today’s dynamic, disrupted and ambiguous world.

While it is clear that one of the challenges of being ambidextrous is knowing which mode to be in at any given moment in time, it is also necessary to have the requisite processes, tools and skills to be effective once you have determined which mode to be in. So it all comes down to thinking — and acting. As Emerson memorably put it, “The ancestor of every action is a thought.” It doesn’t really matter how you think if you are not consistently converting that idea into reality.