Search Outside; Think Inside

You can’t sit at your desk and nextsense. I’m betting that resonates with most people, because it is obvious to most that looking inside one’s company is not likely to lead to the path of the corporate future. Yet, there are so many companies whose destinies have been wrecked by the predilection of top managers either to not look at all or to look only at at internal operations, while the firm slowly but surely sinks.

In 2009, Drea Knufken (@dreaknufken) in Business Pundit wrote a fun (but very instructive!) article about “The 25 Worst Business Failures in History” [link]. You should check it out before you go to the next meeting that is even remotely tied to the need for innovation inside your business. Just to give you a feel for how other companies went wrong, allow me to quote a few excerpts from a few of Knufken’s examples.

Of Pets.com, she notes: “They overexpanded by opening a nationwide network of warehouses … too quickly (taking a hint from Starbucks). Unfortunately, profits never caught up with media buys for commercials. In marketing, nothing is worse than having everyone know who you are and no one interested in what you sell.”

Of Polaroid, she notes: “But while you and I were buying our first digital camera, printing pictures and later taking photos with our phones and PDA’s, the execs at Polaroid were snapping and shaking their pictures into oblivion. So loved was the brand that countless people took daily shots of and created art, diaries and literature using these magical snapshots taped to their walls or to the street. The leader of an amazing niche technology that so enriched anyone born before 1980, Polaroid went bankrupt in 2005.”

Of Ford’s Edsel, she notes: “In 1958, Ford’s newest vehicle, launched on ‘E-Day’, flailed, flopped, and imploded. Ford kept the Edsel under wraps as a new kind of futuristic, experimental car. One fateful day in 1958, the Edsel was revealed … and immediately faceplanted. This car of the future was blah by anyone’s standards.” 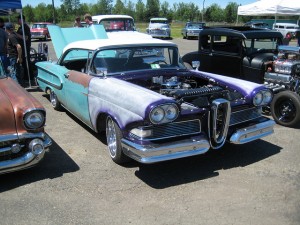 Each of these stories of failures have been profiled in enormous detail by authors and case study writers. I cite these three from Knufken’s work because they all seem to me to expose the enormous dangers to any company that does not look outside its own walls at the marketplace, competitors and, most importantly, potential customers. They didn’t search outside.

A notable example of a company agressively searching outside is Intel. Natasha Singer (@natashanyt) in the 15 February issue of The New York Times (@nytimes) wrote about “Intel’s Sharp-Eyed Social Scientist” [link]. This is a don’t-miss profile of Genevieve Bell (@feraldata), an anthropologist who has worked at Intel since 1998. Doing what?

Dr. Bell’s title at Intel, the world’s largest producer of semiconductors, is director of user experience research at Intel Labs, the company’s research arm. She runs a skunk works of some 100 social scientists and designers who travel the globe, observing how people use technology in their homes and in public. The team’s findings help inform the company’s product development process, and are also often shared with the laptop makers, automakers and other companies that embed Intel processors in their goods.

I strongly urge you to read the article, because it is a great example of the enormous commitment one company is making to be certain that it is searching outside its own walls to observe life, organise its search data, and originate new ideas about what all this means to the future of the firm. Singer provides terrific examples of how Dr. Bell’s team has made a difference. Thanks to the team’s work, Intel is examining the potential for items such as wearable electronics, “ultrasmall chips”, and robots for the home and office.

Only when one begins to comb the world for clues about the future direction of society and the marketplace can nextsensing truly begin. Increasingly, I am defining innovation as bringing “what’s happening” out in the world to those inside the company who can translate such observations (via disciplined thinking) into strong hunches about future possibilities. Per Singer’s article: “My mandate at Intel has always been to bring the stories of everyone outside the building inside the building — and make them count,” says Dr. Bell, who considers herself among the outsiders. “You have to understand people to build the next generation of technology.”

But I’d add that this is not just about technology. You have to understand people — and how they are living and working around the globe — to build the next generation of anything.