Revolution In The Air

Is the business world due for a revolution? That was the idea behind a brilliant closing address by Charles Handy [link] given last week at the 9th Global Peter Drucker Forum in Vienna [link].

I sensed a degree of restlessness among the 400-500 attendees. The theme for the event was daunting: “Growth and Inclusive Prosperity: The Management Challenge of the Century.” Many attendees, I felt, were looking for something dramatic to be said — perhaps a whole new direction for the profession of management to be discovered and announced. And, to be sure, in the moderated panels, plenary sessions, and expansive interpersonal discussions, there were many instances of exhilarating thinking.

Yet the always quotable [link] Charles Handy did not disappoint in his closing comments.

“I want to start by taking you back five centuries because there is wisdom in history,” he opened. “500 years ago, last month, an unknown friar in an unknown German town, laid a complaint against his employer. The unknown friar was Martin Luther, the unknown town Wittenberg and his employer was the Catholic Church. It wasn’t a complaint, it was 95 complaints. But there were two basic theses, themes to his complaints.

“The first was that to be able to buy your route into heaven and paradise was wrong. Yet that was exactly what the church was offering through its system of indulgences. A sort of passport to heaven that you could buy. It was a scam. It encouraged the poor to give what they had to make the rich richer. Sounds familiar today. Luther thought it immoral. I thought it immoral. And indecent and inhuman and it still is. 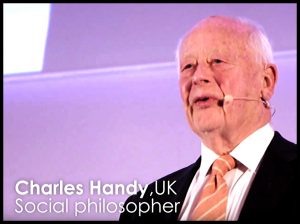 “The second theme of his complaints was that you did not get to heaven by virtue of what you did because what you did was so laid down by the organisation and so regulated by the organisation that it really couldn’t count as yours. You got to heaven, in other words, you succeeded by what you are not what you did. And he called this justification by faith, I call it recovering our basic individual humanity. I think that message still rings loud and clear 500 years later.”

Noting that “Luther started something”, he added that this one great thinker generated great change:

It took time. Great change does take time. But one man can do it. He started the reformation of the Christian churches which became, in due course, the Enlightenment. Which led to the ultimate separation of church and state and to free thinking, the revolution in France, the revolution in America, the release of individual initiative; and we had two following centuries of amazing inventiveness, creativity, and economic growth which ended up with being more prosperous, living longer and more healthily than ever before in history — for most of us anyway. And we should be grateful for that.

He soon described his own early days (60 years ago) working among the organisational norms of a corporation, Royal Dutch Shell. He notes, at first, that his small part of the larger company made things human. He says he knew all his fellow employees: “I knew what they did, but more importantly, I knew who they were. I knew their families. I knew who was good and who was bad. I knew whom I could trust and whom I should avoid. I knew whom I should follow and whom I should avoid. It was good. But then, things began to change. I got back to London and by then, the thing was not a company anymore, it was a corporation.” There seemed to me some dread in his voice when he said “corporation”. In London, Handy became “a temporary role occupant in a corporation — with the emphasis obviously on the word temporary because [cards with names on doors] could be slid in and out. And I had what was called a role description. Three pages of the things that I was meant to do which would be checked. Unfortunately, I noticed that my name wasn’t on the top. It was just the role of whoever had it at the time, who had to do these things.”

“Then, one day I noticed the bits of cardboard had been removed throughout the organisation. Suddenly I wasn’t a name at all, I was just a number, MKR34. This didn’t sound very human to me nor to my wife, whom I had just married, whose instincts were that this was not a very human place and that I was better off out of it. I was obedient and I left.”

Over the last four decades, those who have followed Handy’s slew of easy-to-read but deep-with-thought books know that he made the right choice. And, in the rest of his closing remarks, he essentially called for a reformation in how the business world operates. He essentially called for a more human face to what is an increasingly corporate world defined by digital technology and artificial intelligence.

“So we must be careful. We must be careful that our humanity is not swamped by the digital revolution. I thought, maybe we should need a charter for humanity that people can hang onto as they organise their corporations. And I thought, that’s not enough. Actually, we need a cultural revolution. We need to rethink how businesses, particularly, but all organisations are actually run. And why they are run. And what is the purpose of business. Again, the things that you were talking here about earlier. And you’ll say, a revolution? Isn’t that a bit steep? I say, well no, Luther did it. One man. An unknown friar did.”

Perhaps the best thing about Handy’s closing words were that he did not in any way put himself forward as the leader of the revolution in the business world. He said, at the start, that he was but a “page turner” in the history of organisational change.

Instead, he said that those attending the Drucker Forum meeting should assume the leadership mantle.

“Let me ape another Martin Luther and have a little dream. No, a big dream.

“Could not the modern Wittenberg be here? In the Drucker Forum.

“And who is the Luther of our time? Why could it not be Peter Drucker with his words from the grave magnified by you, by us? And exemplify it by putting our words into practice so the word goes forth multiplied by 500 people speaking with a loud voice in their areas, in their own spheres of influence and acting out their words in their actions.

“And if people criticize you, be bold as Luther was and say, “Here I stand. I can do no other because this is the right way to behave.”

To all of you who were not at this meeting in Vienna, you can see the entire Charles Handy address via this link. To my mind, his petition for major change in the world of business was not at all limited to the attendees at the Drucker Forum. Handy has invited all of us to start fires where we live and where we work. And lest you feel that this is too big a task for you to take on, please heed his closing words.