We just published our first NextBrief. Interested in the future of television? This is for you.

As The Nextsensing Project has grown, our worldwide team of NextSensors has been itching to dig deeper into major areas of potential seismic change. To be sure, the concept of television in the 21st century has captivated the attention of people worldwide. There are two major reasons for this. First, people are dissatisfied with how television has evolved. Despite video recorders and network streaming, TV still seems to be a one-way street. Those who control TV content and those who broadcast it have (since the mid-20th century) controlled what we watch within the confines of the technology inside our bulky, room-based television sets. 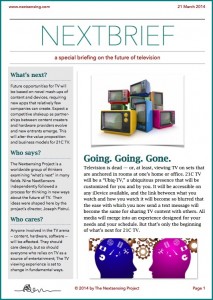 Building on this dissatisfaction, the allure of 21C TV received a jolt when the world took an above-average interest in the rumours of a new “Apple TV” that would fundamentally change the nature of TV watching. (These rumours, mind you, go back several years.) Meanwhile, everyone waits.

But not our NextSensor team [link]. I asked nine NextSensors to think about the future of television using the nextsensing process. Nora Anderson, Angela Brennan, Dimo Dimov, Steven D’Souza, Anton Elizarov, Petros Kirakosyan, C. Todd Lombardo, Tatiana Sadala and Coree Schmitz accepted the challenge. And, frankly, what they came up with was most impressive! Their individual thoughts were combined and refined, and NEXTBRIEF: A Special Briefing on the Future of Television [link] has now been published. Just click the link or the “NextBriefs” tab on the left on our home page.

If you’d like a one-page overview of our first NextBrief, we have added a “News” tab for The Nextsensing Project that you can access here [link] or via the related tab on the left of our home page.

I salute the stimulating thoughts submitted by the NextSensors involved in this report. I’ve mulled this subject a long time, and I learned a great deal from these nine thinkers while we worked on this special report.

Let me invite you to read our NextBrief and share it with others. As I said earlier, if you’re interested in the future of television (and who isn’t?), what we have just published is designed for you.