Be assured: in case you’re one of those people who don’t like their work (or their workplace), you are not alone. Let me share some headlines, literally, from all over: 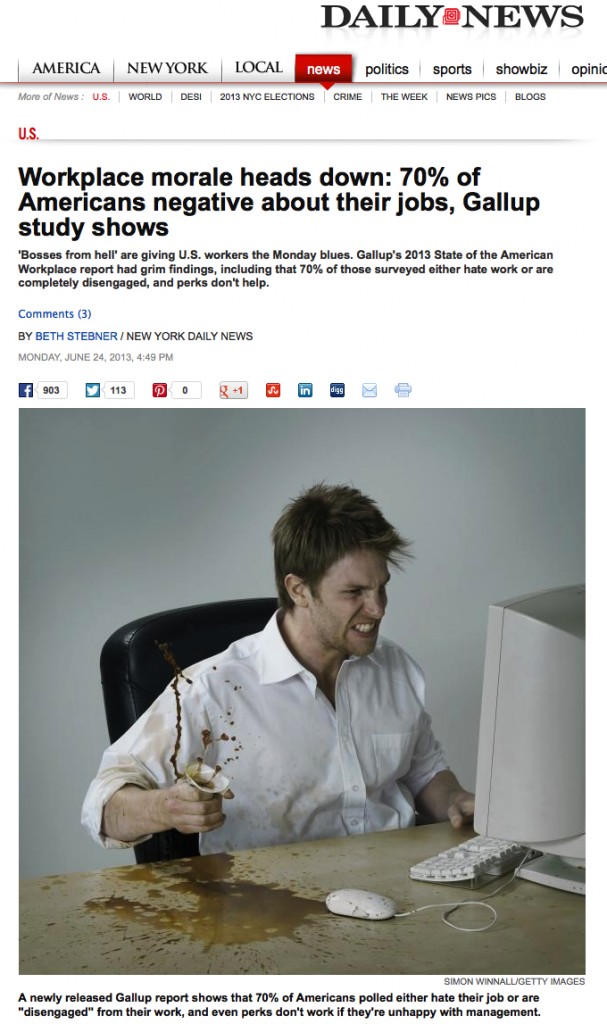 Okay, there are seven new stories of the dozens I might have listed. And, while the above links are fresh, I can find similar reports going back in time. Here’s just one, from 2009: “Unhappy Australian workers prepare to abandon ship” [link].

New research based on surveys using a smartphone app found that workers were unhappy and stressed while on the job. In fact, respondents ranked being sick in bed as the only activity more unpleasant than working. When offered dozens of options ranging from leisure, such as going to a concert, to personal paperwork, such as paying bills, workers preferred cleaning the house or waiting in line to being on the job.

All of this may be stirring memories of the thoughts of Deborah Mills-Scofield that I recommended in my post on “Les Bizerables” [link]. Deborah could not have been more spot on when she talked about the burgeoning level of fear in workplaces as people face certain change. While people might not care for the status quo, the threat of change seems even less palatable.

In Deborah’s words: “So what do we, our people, our organizations do? We shut down. We show up, do our jobs, follow policies and procedures and check our hearts, souls and even minds at ‘the door’. We know what that does to growth, profitability and purpose!” [link]

It is easy to become depressed over this trend. In me, these reports stir my own commitment to making workplaces better by making them more focussed on the future and by making that focus shared, not singular.

TIME recently published one of the few related stories on this subject that had a thread of optimism. “You Probably Hate Your Job — But You Don’t Have To” (by Josh Sanburn) [link] offers five recommendations on how unhappy workers can themselves start to embrace change. Specifically, Sanburn quotes “Jim Harter, Gallup’s chief scientist for workplace management.”

According to Sanburn, “Employers play a key role in determining whether a workplace is enjoyable or not, of course. But employees also maintain significant control over whether they feel fulfilled at work.” How? Harter offers five points:

Make sure you have the tools you need to be effective.

Tell your boss what makes you most effective and fulfilled.

That final point is where managers should be most attentive to worker needs. I’ve often shared with audiences my analogy that being immersed in disruptive ambiguity is much like driving a car in dark woods at night without headlights. Nextsensing can be liberating for workers and managers alike as all join in an effort to find the next level of growth and reward for an enterprise. As Sanburn fleshes out that fifth point about seeing the bigger picture, he says:

A big part of feeling fulfilled is making sure you have the right job in the first place, and that’s often a matter of feeling invested in the overall goals of the organization. “We have a basic human need to see ourselves as part of a group that has an important purpose,” says Harter. “The more people feel they’re connected to that larger tribe, the better the performance because they’re thinking about something bigger.

Misery today is prevalent in companies. Finding what’s next for those companies is the first and best way to make things better.