Many today do not have an extensive attention span. Instead, they have “attention spangles”. Their attention span is as small as a sequin, sometimes glittering with brilliance but, in the main, only a brief reflection of someone else’s intellectual light.

I’m alarmed by this as nextsensing requires keen observation reinforced by extended reflection and thinking. Today, what I see most people doing is glancing left and right, gulping down half thoughts, rinsing those with splashes of bewilderment, and then moving on to a steady diet of other information tidbits. Deep data analysis? Critical judgement about what’s true? Comparative assessment of what’s significant and what’s not? Say most: “Sorry, no time. Gotta check my emails and social media posts.”

This is not without great cost to the careers of many people, and ultimately, to society. This thought was driven home to me by a recent — and quite brilliant — analysis of four books written by Jacob Weisberg (@jacobwe) in The New York Review of Books [link]. I’ll list the four books momentarily, but it’s important to set the tone of Weisberg’s insight:

Americans spend an average of five and a half hours a day with digital media, more than half of that time on mobile devices, according to the research firm eMarketer. Among some groups, the numbers range much higher. In one recent survey, female students at Baylor University reported using their cell phones an average of ten hours a day. Three quarters of eighteen-to-twenty-four-year-olds say that they reach for their phones immediately upon waking up in the morning. Once out of bed, we check our phones 221 times a day — an average of every 4.3 minutes — according to a UK study. This number actually may be too low, since people tend to underestimate their own mobile usage. In a 2015 Gallup survey, 61 percent of people said they checked their phones less frequently than others they knew.

This is by no means a problem restricted to the US and UK. Anywhere I have travelled, I observe the same behaviour set. The need to stay digitally connected seems to surpass all other tasks and duties.

I even see this in the classroom with postgraduate students who often work for major global corporations. Just a few years ago, I would ask my students to spend 45 minutes for an in-class assignment that required critical thinking and extensive peer discussion. The same assignment today is often done in 20 minutes as a check-off-this-box exercise — rushed through so students could return to their digital world via their iDevices. While I do not have enough evidence to establish causality between this evolution and smartphones, I surely do have my suspicions. 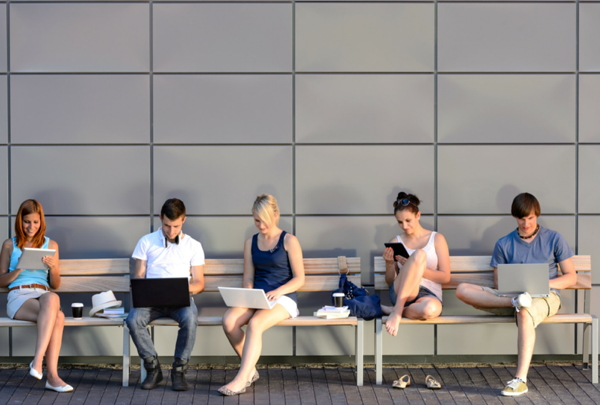 Let’s extrapolate this point of view. Many CEOs will send their teams a current book deemed important to the business. How many managers actually read (as opposed to skim) the book? Business schools love case studies, which are often dense with text and charts. How many students settle for the gist of the case rather than the dissection it warrants? Even in the world of entrepreneurs, how many new businesses are started without the due mental diligence that would augur a sustainable future?

The four authors he considers each take a stab at that question. Here are the books:

Weisberg nicely highlights each of these, which makes his review so valuable. That said, I just added these four books to my reading list because the linkage here to nextsensing is palpable. Sherry Turkle (@STurkle) has two books on the list, and I know from meeting her recently that she is struggling to find ways that technology can enhance the roles of people inside organisations, not marginalize it. Her thoughts on the loss of empathy between people as a result of technology bear special mention, as empathy is the highest form of sensing.

Go back to the basics for successful teams. They are powered by earnest, open and extended intercommunications, which forge ever higher levels of trust — and empathy — among team members. Too many teams today seem to only to be powered by the phrase “Gotta go!”

Perhaps you’ve heard the comment by Einstein that “we shall require a substantially new manner of thinking if mankind is to survive.” While I fully acknowledge that some today exhibit the kind of new thinking that Einstein craved, the majority will forever be handicapped by attention spangles that prevent real thinking at all.