Have A Merry… Robot?

Robots are not as new as you might think, but the threat of robots replacing human workers has been a persistent topic of discussion since at least the 1980s. While Leonardo da Vinci had the concept of a mechanical knight in 1435 [link], the latest “oh wow” article I’ve seen on robots was “A new Japanese hotel is staffed by robots, and it’s extremely terrifying” by Casey Tolan (@caseytolan) on Fusion [link]. I want to go there; don’t you? Per Tolan:

Henn-na Hotel—which means “Strange Hotel”—opens on Friday in the southwestern Nagasaki prefecture with a staff of about ten robots. The 72-room hotel is built in the middle of a theme park intended to recreate a small Dutch town.

The robots will check-in guests, carry bags, clean, store luggage, and answer guests’ questions in English or Japanese. The hotel’s management would like you to know that these robots are not the kind that are going to kill you or take over the world.

With big hotel chains consolidating — such as Marriott and Starwood [link] — and with reports that old-style hotels are losing business [link], perhaps a Robby the Robot [link] receptionist or porter is the way to go. 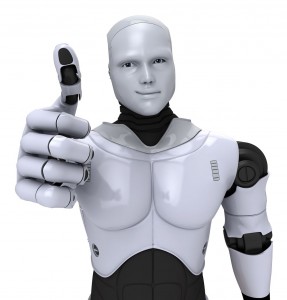 Yet, there’s a larger issue here and a real one for anyone contemplating what’s next for careers and organisations. For example, Alex Hern (@alexhern) and Dan Milmo (@DanMilmo) just published “Thinking machines: the skilled jobs that could be taken over by robots” in The Guardian [link]. Read also Conner Forrest’s (@ConnerForrest) report, “Chinese factory replaces 90% of humans with robots, production soars”, on TechRepublic [link]. I still recall the impressive HBR article from last December by William H. Davidow and Michael S. Malone: “What Happens to Society When Robots Replace Workers?” [link]. And, there are no fewer than 10 TED talks on how to live with robots [link].

To be fair, there’s another point of view here. You might want to check out Matthew Yglesias (@mattyglesias) and his take on “The automation myth: Robots aren’t taking your jobs — and that’s the problem” on Vox [link]. Says Yglesias: “Rather than an accelerating pace of automation, we’ve actually been living through a slowdown in the pace of productivity growth. And that slowdown is a huge problem. Unless it reverses, we’ll be waking up soon to find ourselves in a depressing world of longer working years, unmanageable health-care needs, higher taxes, and a public sector starved of needed infrastructure resources.

“In other words, don’t worry that the robots will take your job. Be terrified that they won’t.”

I see the trend toward more robotics in society as irreversible and its impact growing steadily. For me, the intersection of robotics and nextsensing is a major one — and exciting, to boot. Independent of your feelings and attitude about robots (especially in your hotel room), you must admire the edgy mindset behind the experiment. Talk about thinking differently, having aspirations for the future and challenging the status quo! This seems to check all the boxes to qualify as a nextsensing alert. But is it really that simple? I don’t think it is.

In the 1940s, Isaac Asimov posited his famous “Three Laws of Robotics”:

2. A robot must obey orders given it by human beings except where such orders would conflict with the First Law.

3. A robot must protect its own existence as long as such protection does not conflict with the First or Second Law.

According to George Dvorsky (@dvorsky), Asimov later added a pre-eminent law [link]: 0. A robot may not harm humanity, or, by inaction, allow humanity to come to harm. I don’t believe Asimov (a genius to be sure) ever thought about robots handling room service from start to finish. That’s going to have to be our job.