Got all the answers? Read this!

There are no cemeteries for corporations, but perhaps there should be. Such burial grounds for those who were once mighty in the marketplace might force managers to think harder and to focus further out. It might help reduce the complacency that pervades so many firms. And it might just generate a new priority inside companies to nextsense.

Hop to Eli Radke’s (@eradke) post from last February: “86% of the 1955 Fortune 500 have failed” [link]. It’s powerful stuff, even if you now are part of a smaller enterprise. Consider this stat: Radke notes that in the United States each year, some 500,000 businesses are created. He then reports that 50% fail in the first year; in the first five years, another 56% fail. 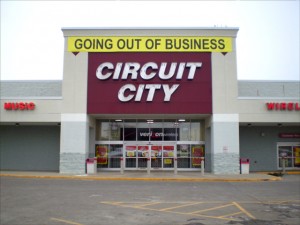 I just read a powerful three-page synopsis published in Econ Focus by Jessie Romero of “The Rise and Fall of Circuit City” [link-PDF]. Haven’t heard of the once-mighty electronics firm? Just to whet your interest, here’s how the short article begins:

One of the great success stories of American retailing, Circuit City got its start in 1949 as a tiny storefront in Richmond, Va. From that modest beginning, founder Sam Wurtzel quickly built the company into a national chain, and his son Alan turned it into a household name. By 2000, Circuit City employed more than 60,000 people at 616 locations across the United States.

Circuit City is also one of American retailing’s great failures. In November 2008, the 59-year-old company filed for bankruptcy. Within months, it closed its stores and liquidated more than $1 billion worth of merchandise, and on March 8, 2009, the last Circuit City store turned off its lights for good. Today there are few reminders of the groundbreaking retailer; the company’s 700,000-square-foot headquarters complex outside Richmond is filling up with new tenants, and the empty stores have been taken over by new retailers.

Not attracted your interest yet? Well, let me also cite that “Circuit City was so successful that management expert Jim Collins featured the company in his 2001 book Good to Great, a study of the country’s most profitable companies.” No one has a lock on future success.

Romero’s three-page article is powerful simply because it compresses this sad story into such short space. There is at least one, longer case study that you can read. A team of six people studied the company and determined what went wrong [link]. Yet, perhaps the best resource for you to read is by Alan Wurtzel himself, who wrote Good to Great to Gone [link]. Marketplace interviewed Wurtzel, which you can also view [link].

I share all this because it is too easy — far too easy — to think that nextsensing is only an academic exercise. Yet, one quickly realises that, in the story of Circuit City, thousands of real-life workers, suppliers, investors and communities took a hit. Romero asks, at the end of his article, “If Circuit City had done things differently, would it still be around today?” It’s much to Romero’s credit that the article ends with this question essentially unanswered. There are too many variables.

But it is for sure that, when a major competitor appeared, Circuit City did not ask the essential questions it should have. Nextsensing was the furthest thing from its mind. Says Romero:

But Circuit City didn’t see Best Buy as a threat. “We thought we were smarter than anybody,” says Alan Wurtzel, who remained on the board of directors until 2001. “But the time you get in trouble is when you think you know the answers.”

As I’ve noted before, extinction is forever [link]. Circuit City was once a might corporation; now, it’s just a case study. Don’t let it happen to your company.