From Leader To Legend 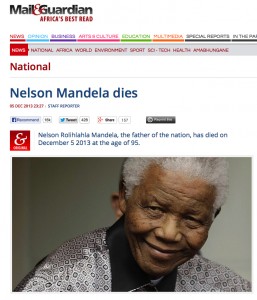 Last June, when I wrote “Nelson Mandela Will Always Be With Us” [link], it was with the expectation of his imminent passing. As you most likely know, Mandela died last week and the burial will be held 15 December [link]. The more formal eulogies started today, as South Africa began a prolonged period of mourning. Said President Jacob Zuma [link]:

We felt it important that we should have a day where all of us as South Africans can come together and pray for our first democratic president and reflect on his legacy. But it is also to pray for our nation … to pray that we not forget some of the values he fought for … Mandela distinguished himself for good things and good things only.

As people have been paying their tributes to Mandela, many have struck me.

First, I marvel at his roots, which would not have projected the greatness of the man [link]:

Mandela was born on July 18, 1918, in the Transkei, a region of rolling green hills near the southern tip of the African continent. In his autobiography, Long Walk to Freedom, he recalled his childhood as a simple, joyful time. He herded sheep and cows near his mother’s huts and played barefoot with other boys. He was educated by British missionaries, got a law degree and eventually opened the first black law firm in Johannesburg.

Then there’s the lighting of an eternal flame in his hometown, Qunu, located in an Eastern Cape province [link].

“The flame, it symbolizes a multiplicity of things,” said Nozuko Yokwana, chair of the Nelson Mandela Museum, who called the esteemed former president a “beacon of light” and a “beacon of hope.”

“His character, his behaviour, his leadership, his values and principles. It also says to us that we cannot stop now just because he is gone, but we must continue to light the nation, to do things that we have been doing, and strengthen ourselves and motivate ourselves,” she said.

So many people have proclaimed how special and influential Mandela was to their own lives. But it’s amazing that the list includes entrepreneurs such as Bill Gates [link] and Richard Branson [link].

I included some biographical links in my earlier blog [link] on Mandela. I do commend the Nelson Mandela Centre of Memory for a quick and graphic summation of his life [link]. And while there are many lines from Nelson Mandela that I could quote as a close, I offer this, one of my personal favourites: “Education is the most powerful weapon which you can use to change the world.” I remain confident that Nelson Mandela will always be with us.