Be unafraid. Be very unafraid!

Don’t be afraid to engage Ed Catmull and his ideas. Catmull (@edcatmull) is one of the founders of Pixar (along with Steve Jobs and John Lasseter); and, if you have seen Pixar’s great animated films — from Toy Story to Frozen — you have seen the brilliance of the man who is now the president of Walt Disney and Pixar Animation Studios [link].

Catmull is also the author (with Amy Wallace) of Creativity, Inc.: Overcoming the Unseen Forces That Stand in the Way of True Inspiration [link]. The book has been spotlighted by many journalists, none better than the one recently posted by Maria Popova (@brainpicker) on the Brain Pickings website [link]. In her review of the book, she notes that Catmull is the happy blend of opposites:

[H]e is incredibly intelligent in a rationally-driven way yet sensitive to the poetic, introspective yet articulate, has a Ph.D. in computer science but is also the recipient of five Academy Awards for his animation work. This crusade to uncouple fear and failure is thus delivered not with the detached and vacant preachiness of self-help books and lifestyle manuals but with the sensitive sagacity of someone who has been, and continues to be, on the front lines of truly pioneering creative work.

What’s the book about? There is a dedicated website for the book and its creators. On one page, it lists a number of “take the advice of an experience leader” bullet points that give you a strong feel for what you will find in the book itself, for example [link]: 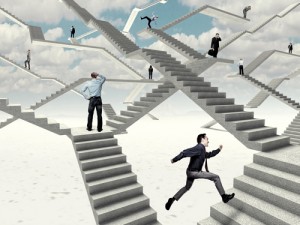 I’m sure you get the feel: Catmull wants to encourage a fear-free organisational culture in order to spur both creativity and productivity.

I’ve seen many companies suppressed by abundant fears. People don’t want to be criticized (or fired) so they hug the status quo to the point that any ideas for improvement are stifled. This is a critical problem for a NextSensor who works in such a firm. Nextsensing is about the future, and what makes future-tense problems different — and more difficult — is the inherent ambiguity and uncertainty they represent. That is why failure must be an expected part of the organisational equation. The metric for success is learning (as in how much) and not accuracy of prediction. We should not be looking for a forecast but rather a novel point of view that illuminates understanding and meaning.

Catmull advocates calling out, embracing and bringing light to mistakes. Agreed! Such behaviours are the triggers for learning. So start doing it. Watch the novice skateboarder trying to learn a new trick and determined to make it happen; he or she tries and tries and tries. Mistakes in execution occur; the body gets scraped. The skateboarder gets back up and, after figuring out how to do the trick after a few more times, inherently begins thinking about, looking for, and experimenting with the next trick. Yesterday’s skating trick is yesterday’s news.

Oh, by the way, serious skateboarders wear a helmet and pads (knee and elbow) because they expect to fall. It’s part of mastering the next tool in the ultimate skateboarding skill set. The idea is to stretch one’s limits and thereby grow.

Dan Schawbel (@DanSchawbel) on the Forbes website interviewed Catmull [link] and, in one part of the Q&A, he provided a real-life testament to my skateboarding analogy:

Schawbel: Many companies fear risk taking. How do you enable it and why is it so important to your business?

Catmull: It is not the manager’s job to prevent risks. It is the manager’s job to make it safe to take them. What does this mean in practice? It means being encouraging, of course, when someone comes up with an idea – a movie about a rat who wants to be a gourmet chef, to use Ratatouille as an example – that may at first seem far-fetched. But it also means that when a far-fetched idea fails to pan out, you must make it clear in ways both explicit and implicit that there is no shame in that. It is only by trying new things that we can hope to create products that are original. Don’t just say those words; act like you believe them.

Fear is present-tense; aspiration is future-tense. Successful leaders manage the inherent tension between present-tense and future-tense problems and know which they are — and need to be — dealing with at any given moment. The best companies I have worked in embrace the tension for all it is worth and wrestle with it as a source of insight and inspiration. The companies dominated by fear seem to give every employee a hammer and require them to see every new idea as a nail. Ed Catmull teaches us that there is a better way.