A new class of educators

Education has so far avoided the kind of major disruptions we have seen in the media and publishing businesses — or the music and travel industries (to name just a few). Why? Simple, inertia. In secondary education (K-12 in the US) it has been the teacher’s unions that have kept change out; while at the university, the unquestionable “freedom” afforded to tenured faculty has preserved the status quo. As a result, the art of excellent teaching is not always valued, or even recognised.

Any real harm in that? Yeah, plenty. Consider some stats from a recent Forbes article, written by Michael Noer:

According to a report from the President’s Council of Economic Advisers, global spending on education is $3.9 trillion, or 5.6% of planetary GDP. America spends the most — about $1.3 trillion a year — yet the U.S. ranks 25th out of the 34 OECD countries in mathematics, 17th in science and 14th in reading. And, as in so many other areas of American life, those averages obscure a deeper divide: The U.S. is the only developed country to have high proportions of both top and bottom performers. About a fifth of American 15-year-olds do not have basic competence in science; 23% can’t use math in daily life. 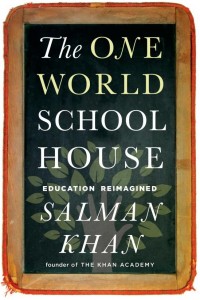 The real focus of the article is on the academy started by Salman Khan, which is now “the largest school in the world, at 10 million students strong” and other edu-entrepreneurs who are permanently changing the way people learn. The extensive Forbes article is definitely worth your time. But just to give you the flavour of what Khan has done, per Noer: the non-profit Khan Academy “features 3,400 short instructional videos along with interactive quizzes and tools for teachers to chart student progress.” It’s mission is “a free world-class education for anyone anywhere.” And Noer says that the funding for the school comes mainly from avant garde philanthropists. And, reports Noer:

Over the past two years Khan Academy videos have been viewed more than 200 million times. The site is used by 6 million unique students each month (about 45 million total over the last 12 months), who have collectively solved more than 750 million problems (about 2 million a day), and the material, which is provided at no cost, is (formally or informally) part of the curriculum in 20,000 classrooms around the world. Volunteers have translated Khan’s videos into 24 different languages, including Urdu, Swahili and Chinese.

What captivated me about Sal Khan more than anything else was his motivation. One does not sense it’s about making money (although that could happen). Instead, Khan’s intrinsic motivation is to change the fundamental character of how people learn. Worldwide. That may be why he personally created more than 3,000 of the videos. He also wrote about a book about what it took to create his One World Schoolhouse (Hodder, 2012).

Nextsensing people, as I see it, are drawn to big problems. Whether it’s about changing organisations, companies, industries or professions, their discomfort about not having a perfectly formed solution to current problems is balanced by leaps of faith, experiments, discoveries and constant iterations to find the “secrete sauce” for what’s next. Study Khan’s approach to changing education, and you will undoubtedly learn some things about how to find your own next.