Oxford Dictionaries tells me that the word and concept of a “magazine” goes way back: “The term originally meant ‘store’ and was often used from the mid 17th century in the title of books providing information useful to particular groups of people….” The magazine industry at one time was an enormously successful one. From general interest magazines to arcane publications, the number of periodicals grew and grew.

In recent years, many of us have cancelled our subscriptions as digital devices filled the niche for anyone wanting to read any kind of information. The numbers from the US in 2011 tell the story: printed magazines are shrinking while those publishers savvy enough to move their journals to a digital platform saw at least some hope in their circulation numbers.

Yet, the 1600’s concept of a “magazine” is still what most people think of when the word is mentioned. The idea is that a team of editors with above-average knowledge of the subject field collect the best articles and artwork and package them for delivery to interested readers. That idea is now sooooo-2012. As Paul Armstrong on paidContent reported less than a week ago, the digital platform managed by Flipboard (@Flipboard) has just reinvented the concept of a magazine and put you and me in charge. We are talking revolution here, as magazines could soon be redefined as an intelligent collection of articles by anyone and for anyone.

In case your head is slightly swirling here, let me highlight the basics of this revolution.

What is Flipboard? This is an app that you can use on most, if not all, digital devices. It’s perfect for any digital pad (the idea of a desktop Flipboard app is under consideration). What the app does is collect articles from a wide range of other publications and allow you to organise and review them as you wish and in just about any order. From breaking news to finance to politics to travel to tributes & obituraries: one can easily assemble the flow of information in a design that you select.

Where’s the revolution in that? Okay, a lot of publications now do much the same thing; and, other than Flipboard being an intermediary for lots of other journals, one’s excitement level could be easily contained. Paul Armstrong cites this link in his blog post: “Flipboard launches custom curation tools, wants to unleash your inner magazine editor”, which was written by Matthew Ingram on GIGAOM. So, here’s the rest of the revolution. Flipboard now enables any of its readers to search (via Flipboard) any subject, peruse results and assemble the best-found information into a magazine that can be shared with the rest of the world. As Ingram describes the innovation: “It’s a little like Pinterest merged with Tumblr, crossed with a better-looking and more social version of Google Reader.” The magazine-creation function is limited to iOS for now; Android capability is coming.

Regular people putting their own magazines together and sharing them? About what?!? This is where it all gets fascinating. Suppose I had an interest in “Great Ideas”, I could (with this app) find a highly focussed digest of whatever that phrase means to me (creating great ideas? 50 great ideas? why aren’t there more great ideas?) and send you a link via e-mail that invites you to read what I just “published”. Then again, I could make my editorial handiwork public, in which case my magazine would be searchable via Flipboard. Moreover, Flipboard takes a healthy sample of public magazines and features them. I’m scanning some 60+ of them now and I am dazzled by the creativity. Some just-made journals include: Salad ballad, British coastlines, Struggles of War, Startup News, Great Talks, Email Mafia and Jellyfish and Atom Bombs.

Can you update your magazine? Yes, by adding or removing content — even change your cover art as you update your publication. You can even weave in articles found via standard browsers. And, since the magazine is easily linked to social networks, you can create your own copy by first placing it on Twitter, Facebook, and others then adding it to your journal. Lastly, if your readers like what you have published, they can subscribe to it and receive updates as you post new material.

You mentioned a possible journal on “Great Ideas”. Anyone done that yet? Yes. Boris Aleksandrovky has done this, and Flipboard keeps tab of the stats on the success of his publication. As of my viewing, he had 5,694 readers; 190,420 page flips; and 246 articles within. Nice! 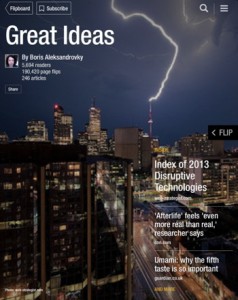 Where can I find out more about this? There’s a good introduction prepared by Flipboard.com, but I would encourage you to watch the video embedded in Paul Armstrong’s post, which features Flipboard’s CEO offering his own tour of the concept. But you won’t have to go far to find news about the concept. Since its launch of this service, Flipboard has brought its subscribers up to 53 million — and, in just a short time, some 500,000 magazines have been created.

When one is in the field of nextsensing, one does not casually use the word “revolution”. I hope I have indicated why I think the term is justified. But I should leave you with a few other thoughts.

Hats off to Flipboard for this effort, but the real news here is the potential disruptive nature of how self-publishing is evolving from the early days of blog posting, liking things on Facebook and participating in chat forums. Think of how far music has come since Napster. We’re probably at the launchpad of a whole new way to subscribe to news and features. Look for an exponential jump in apps that take this concept even further!

This revolution is about the democratisation of personal voice, the spead at which these empowering shifts are taking place, and the incredible high quality outputs that are possible (as with ebooks, garage bands, elearning and beyond). In the 1400s, Gutenberg revolutionised movable type on a printing press; today, the collective e-world is revolutionising immediate type.

Paul Armstrong titled his post “Flipboard is a giant iceberg lurking in the path of the media”, the implication being that magazine publishers are, at best, corporate Titanics soon to sink. That’s at least one possibility, but I’m hearing the warning sirens now blaring for universities, book publishers and booksellers and every media magnate I can now think of. This publishing revolution is getting personal.