If you have been to London, you probably rode the famous Underground. And, if you did that in years past, you may recall the famous “mind the gap” announcement that was played every time a train stopped for passenger exchange. This was a warning to passengers to be aware of the space between the train and the station platform so as not to trip. “Mind the gap” made news recently when the widow of Oswald Lawrence (the man who recorded the message some 40 years ago), asked if she could hear it one more time, since that version of the announcement had been phased out. UK authorities did just that, and the media gave the event lots of press.

When I heard of this touching story, the phrase “mind the gap” somehow clicked another thought.

As I search for good examples of nextsensing around the world, it’s amazing how many companies and their leaders don’t mind the gap. How’s that?

If you will, think of “the gap” between the way things are right now and the way they could be in the future. Most people I meet are preoccupied with what needs to happen in the next hour or day; and there’s a good reason for that: managing the status quo so that the trains (and everything else) run on time demands a great deal of time and energy. Then again, in many companies, thinking about the future is often viewed as wasteful daydreaming. The impression I have is that, today, few need someone to say to them to “stay on task” or “get back to work” as the majority have that message taped and replayed in their heads many times a day.

And yet… some not only allow themselves to think about new ways of doing things, they make it their life’s purpose. They take the gaps that they find in life and decide that they will fill them, no matter what. 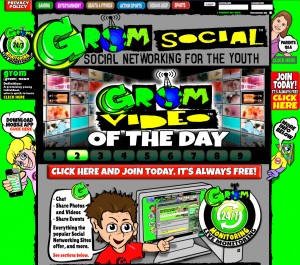 When I say this, please do not think that I am asking you to think now of famous CEOs who created wondrous enterprises out of imaginative thoughts. We can save those stories for other posts. Instead, I ask you to think of Zach Marks.

Zach is a 12-year-old who lives in Melbourne Beach, Florida, and who liked Facebook so much that he asked his dad to help him gain access to the service. As he tells J-14, things didn’t go so well:

I convinced my dad to let me go on Facebook, I had it for about a week or two and then I was seeing adult language that I shouldn’t have been seeing and one of my dad’s good friends caught me and my dad deleted it. We had a pretty big argument. I told him there was no social networking site out there that was fun, safe, and educational.

Zach spotted a gap. With the help of his family, he started Grom Social, a network just for those under 17. As of last January, entrepreneur.com reported that Zach had close to 7,000 members, who could network with Instagram and Twitter integration. You can hear Zach tell his story via this news video, and more media seem to be taking an interest in Zach daily.

May I draw a very pointed nextsensing lesson here? Those who aspire to explore what’s coming next would be wise to focus on what’s missing now.

Many huge corporations with enormous resources could have spotted the lack of a “fun, safe, and educational” social networking site for those under 17 (starting with Facebook itself!). They didn’t. It took someone with the vision and determination of a 12-year-old to make it happen. I’m not saying that Grom Social will become the next LinkedIn. Time will tell. But for all the expensive books and videos and seminars about innovation and strategic planning, a few minutes studying Zach Marks might be the better way to go.