In Search of Living Genius

Try to catch the recent article by Daisy Yuhas in a special issue of Scientific American devoted to the subject of “genius”. That’s a word that’s tossed around a great deal. Some, at least, define what they mean by the term and put forth real names. For example, Smashing Tops once published a list that defined a genius as “a person who proves to be very intelligent or to have a talent that allows him or her to create something original that is unanimously considered exceptional.” The site lists Avram Noam Chomsky, Margaret Carol Turnbull and Phillip Glass in its top 10 list of “living geniuses”, although Steven Jobs has sadly passed away.

In her report, Daisy Yuhas adds another dimension. When it comes to genius, she says, “talent matters, but motivation may matter more”. In other words, smart and motivated is better than just smart. I agree.

Yuhas highlights some deep academic studies that support her idea that “psychologists have identified three critical elements that support motivation, all of which you can tweak to your benefit”: autonomy, values and competence. In a nutshell, people with a great deal of talent will more likely excel to the performance of a genius if they (a) feel in charge of the situation, (b) are working on something that supports or advances their personal beliefs, and (c) feel fully capable of achieving the goal they have to meet.

Here’s one quick example that I’d like to cite from her article:

In 2009 University of Virginia psychologist Christopher S. Hulleman described a semester-long intervention in which one group of high school students wrote about how science related to their lives and another group simply summarized what they had learned in science class. The most striking results came from students with low expectations of their performance. Those who described the importance of science in their lives improved their grades more and reported greater interest than similar students in the summary-writing group. In short, reflecting on why an activity is meaningful could make you more invested in it. 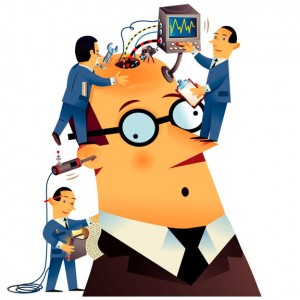 Developing opportunity foresense is as much a function of individual mindset (and collective mindset, or culture) as it is of extrinsic incentives like bonuses, which are all too often the preferred tools of leaders trying to jump-start growth and competitiveness — usually in the short run (this quarter, this half, or this year). Building entrepreneurial mindedness takes time and largely “comes from within” and therefore must be enabled by organisations and their leaders by building and sustaining the contextual (and intrinsic) incentives that are both affective and can be lasting.

Nextsensing is easy to turn off (kill incentives) and difficult to turn on/rekindle if it is lacking in individuals or organisations. Many times it is about getting the right kind of talent in place and then getting out of their way so they can get on with it, and by providing appropriate mission critical parameters for their efforts rather than implementing a controlling rules based set of procedures with financial incentives attached when compliance is demonstrated.