“If you do not change direction”, said Lao Tzu, “you may end up where you are heading.” I’ve been thinking about those ancient words of wisdom for some time now. The reason is really quite simple. Nextsensing is about what needs to be next for people and their organisations — but what if people won’t change? Flash back to my earlier post on “Is anyone safe from the future?” I reported there on a provocative article in The Economist dealing with “innovation pessimism”. Here’s snapshot of what that earlier post was about:

What, then, is this article really about? To me, it is a fascinating study between the speed of new thinking and the speed of organisations. I, too, share the concern that too many firms are still trying to catch up with the great inventions of yesterday. I’m thinking of those companies that still ask customers to register any complaints via the old ways (snailmail or telecons). And then there are the organisations that continue to fly people around the globe to attend half-day meetings that could be done via the Internet. And let’s not forget the large health care centres that have patients fill out paperwork to provide information that the patient has already provided, perhaps several times over, with one or more doctors or with someone else.

As I scan current Internet knowledge, I see that others are struck by the same battle between the need to change and the resistance to change.

Scott Brinker proposes “Martec’s Law: Technology changes exponentially, organizations change logarithmically” [link]. He does a nice job, both with graphics and words, talking about “The great management dilemma of the 21st century is the relationship between these two curves: technology is changing faster than organizations can absorb change.” And, thus, one of the reasons I would suggest you read Scott’s thoughts is that he stresses the importance of organisational leaders adopting an integrated startegy for both changing technology and changing the culture in which that technology will be used. 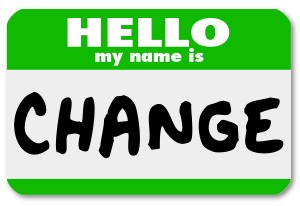 Brian Lassiter also has some sage advice for leaders. In his post about “Changing the Way Organisations Change” [link], he says, “Change is messy. It is non-linear – it is usually chaotic, full of emotions, and completely counter to human’s survival wiring. No wonder organisations struggle in making successful change! So what can leaders do to more effectively navigate change – or at least create a culture that is more resilient to change?” He provides 13 suggestions, tied to (among other areas) control, uncertainty, data and letting go of outdated traditions.

Sean Culey provides an extensive discussion of this subject in his European Business Review post, “The 7 Keys to Unlocking Organisational Greatness” [link]. He reports on formal research he has done and then illustrates his team’s conclusions with a diagram of a tree. Why so? He wants his reader to understand that the greatest reason for any resistance to change may be below the surface (underground, at the root level). Then he discusses “The Curse of the Four M’s”:

Mindset: The mindset of the organisation, its values, beliefs and culture
Money: Whether the organisation has a plenitude or scarcity attitude to its finances
Management: Excessive management, scarce leadership; structure over strategy
Metrics: Excessive number of functionally-focused metrics, not aligned with the goals

I highly commend all of these thinkers and their posts to you. And I would add that perhaps one way to open the discussion of change among people in your own organisation is to think about the key role a simple punctuation mark can make when added to the word “change”.

Change? If you add a question mark, people begin their thinking about change with doubts. Why change? Why now? Who says so? Do I really have to change?

Change. If you add a period, people begin their thinking about change as if it’s static, remote — something “out there” that perhaps needs to be addressed by others but, as for us here, “if it ain’t broke….”

Change! If you add an exclamation point, people can sense urgency, high importance and, perhaps, some excitement and even a promise of improvement and, yes, innovation.

To be sure, Lao Tzu did not envision the manager who has to worry about changing the way people do things today, whether those people are in front of computers or customers, in cubicles or on loading docks. But his words ring eternally true. If your firm resists change, then the company and its people will more than likely end up precisely where they are heading. And what company can afford, a year from today, to be exactly where it is now?