On our website you will see what we affectionately call the “Squiggle”.

The origin of this line goes back at least a year, the work of two designers. Back then, I was simply searching for some symbol of disruptive ambiguity, the state of a leader’s mind when — in terms of the future of his or her organisation — there are far more questions than answers. In such a confused, chaotic state of mind, nextsensing is not only helpful — it’s critical!

Since it was first used, I haven’t really given much more thought about our squiggle. Till a few days ago. As I was preparing for this blog, I discovered the “design squiggle” of Damien Newman (which he had crafted some time ago to help explain the design process. I was delighted to see that he, too, saw the connection between design thinking and ambigious problem solving — just as I have on this project.

Then, news broke that President Barack Obama had decided to nominate Jacob Lew as the next Secretary of the US Treasury. As is typical in national politics anywhere, some say the appointment is brilliant. Some say it’ll do. Some say it is a disaster.

But, based on news reports and social media exchanges, I’d say that everyone agrees that outright panic is in order if Jack Lew’s signature is used to sign US bills (money), to certify their authenticity. His signature? Well, take a look: 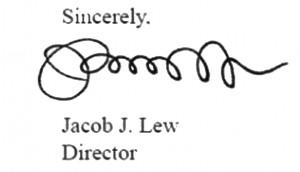 Hmmm. Okay, I can see everyone’s concern about this “signature” on US currency. And this should be a special concern as the US steers into some head-banging negotiations about raising its national debt, which (if violated) would violate the full faith and credit conditions required for any currency to be accepted worldwide. One must always hope that the full faith and credit of the United States never fall into a state of disruptive ambiguity.

But this all gets worse. Yahoo! has seen fit to take Jack Lew’s signature to whole new levels. May I quote:

White House chief of staff Jack Lew’s signature has been ridiculed as nothing more than a series of childish loops — a nontrivial point, given that President Barack Obama is expected to nominate Lew as the new Treasury secretary, meaning his signature will adorn new U.S. currency.

Now, Yahoo News exclusively brings you the Jack Lew Signature Generator. Just type in your name, hit the button, and see what your name would look like in his, er, signature style.

Can you guess what’s coming next? I mean, I just had to do it. I had to see what my own name would look like if I signed documents in the manner and style of Jack Lew. I wouldn’t have thought of it, but Yahoo! made me do this. Made me! Ready?